tangible experience for humans of all ages 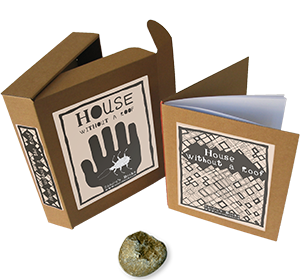 Books in the Boxes

House Without a Roof

House Without a Roof is an engaging story not just because of the storyline but also because of its interactive narrative. Can you imagine an agitated beetle? There is a reason for his agitation. He has a problem and the narrator as well as the reader must take part in helping him solve it.

Another one in a series of books that come with an object each, Great traveler is a story about the importance of experience and adventure in understanding the true nature of things. Apparently not all mosquitoes like to fly and some of them have a thirst for the unpredictable. The only way to find out is to start a conversation. All creatures like to tell their life story, especially as they get older and the mosquito is no exception.

The Grasshopper and His Problems

What seems unimportant to one, could mean the world to another. A Tablecloth is not just a piece of canvas but also a means of socialization for the grasshopper who would like to have friends over for tea. Purpose defines meaning and maybe the readers’ life can become more meaningful too if they have a reason to keep the object that comes with this book.

The life of the strange character of this story might seem ordinary but what’s important is how he views it. Cloudy Room is a story about change, about making connections, about memory and its emotional effects. Through simple, almost childish, narrative style and plot it urges the reader to ask the big questions about the world around and our part in making it meaningful.

Don’t make a promise unless you can keep it. The power of love lets the character of this story keep the most difficult of promises, allows him to activate his imagination and reach for the stars. What does a star look like if it’s picked from the sky and brought down to earth and how does the sky look without it? Even astronomers can’t figure what’s so easy to see for somebody who is in love.

One Story for Two

Tamara’s book is something you can hold in your hands and read now but before it was just a dream. Tamara’s dream was kept in a beautiful box and when the box was opened up, it became possible for the dream to come true. This book is an evidence that dreams can come true.

The Great Book of Insects

A paleontologist finds out that it is not just humans who record history. Insects pass on knowledge from generation to generation as well. Not only that, but he was also able to decipher their strange writing and their history seems to hold a strange resemblance to that of mankind. The Great Book of insects allegorizes the history of civilization through simple but, not at all, primitive examples. It describes the driving force of any life as an attempt to connect to one another.

One Day of Angel

About Angels and the Way They Live

Poems About the Cockroaches

Objects is a series of items that express their individuality through the stories that they tell. Some are the best at what they do, some are put at a completely different use than what you would imagine, some keep secrets and others reveal them. For example, the telephone has heard so much throughout her life that she keeps quiet now. The ancient clock has aged and become forgetful whereas the lock is extraordinary just because it’s so normal.

read the book: IT RU EN

read the book: IT GE

read the book: IT

When the telescope accidentally changes his perspective one day, he finds a whole new wave of curiosity, forgetting about the old and the familiar.

The Museum of Antique Things

The museum keeps not just objects and things but also their past and their memories of the past. That is how it keeps its inhabitants alive.

Cracked Heart tells the entire life story of a heart shaped jewlbox that becomes more and more precious for the reader, the older it gets. Even though it breaks and loses some of its external beauty, it gains a different kind of aesthetic when it’s put back together.

Have you ever heard of piglets so clean that they’re as white as the clouds? Flying piglets are hard to imagine but the difficulty that the little piglet faces is easy to relate to for anybody who has tried to learn a new skill. The story is about finding a voice and direction as an exceptional figure. The little piglet learns how to fly not in the traditional ways but through his own observation of the unusual.

Books About Tamta and Helen

All books have either writing, pictures or both in it, but the book that Ellen got as a gift has neither. It does, however, have extraordinary recording powers. Like so many of Sandro’s stories, Strange Book describes events where it is totally natural and acceptable for dreams to merge with reality. Through the matter-of-fact narration of unlikely events, it teaches subtle lessons about conquering fears, understanding our own experiences and about growing up without losing touch with the inner child.

Children can be less naive than adults and insects can be more playful. When Tamta’s parents decide to have friends over at their house, Tamta decides to take their picture. Little Tamta has a little friend who lives in her camera and who pulls pranks on people. It annoys adults but Tamta has no care- she loves her little friend for his pranks. Old Camera describes the adult world through a child’s lense and fills it with fun and joy.

read the book: EN IT RU

The three arrows of cupid

read the book: EN IT RU

read the book: EN IT

read the book: IT RU